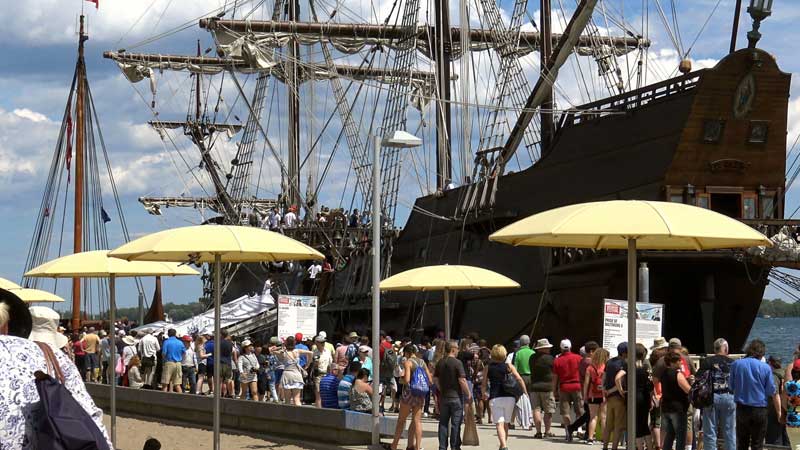 2019 Waterfront Fest: Forced to Move Its Tall Ships and Entertainment Due to High Water Levels

(Water's Edge Festivals & Events) - The Redpath Waterfront Festival, presented by Billy Bishop Airport, returning June 29-July 1, will be relocating some of its tall ships and entertainment to the east end of Toronto's waterfront as a result of rising water levels.

"The safety of our visitors is our number one priority. The boardwalks in the two West end parks that we were planning on activating in are flooded, leaving no area for our ships to dock or our visitors to board. All of the tall ships are still sailing in and all of our Maritime entertainment will go on as plan, just in other waterfront parks" says festival co-producer Lea Parrell.

The festival will no longer be activating in HTO Park and HTO Park West. Festivities will now be taking place in the East end of the waterfront at Sugar Beach and Sherbourne Common. At the time of distribution, there is no flooding in Harbour Square Park and it will remain as a programming park for the festival with ships and entertainment.

The following programming will be taking place in each assigned park:

U.S Brig Niagara, Pride of Baltimore II, Fair Jeanne, St. Lawrence and Playfair
Entertainment to be announced
All plans, marketing materials and the festival website will be updated in the coming days. Interviews with Lea Parrell, co-producer of the Redpath Waterfront Festival, are available upon request.

To learn more about the tall ships, food and entertainment at the 2019 Redpath Waterfront Festival and for festival news and updates visit towaterfrontfest.com and follow @towaterfrontfest on Facebook and Instagram or @towaterfest on Twitter.