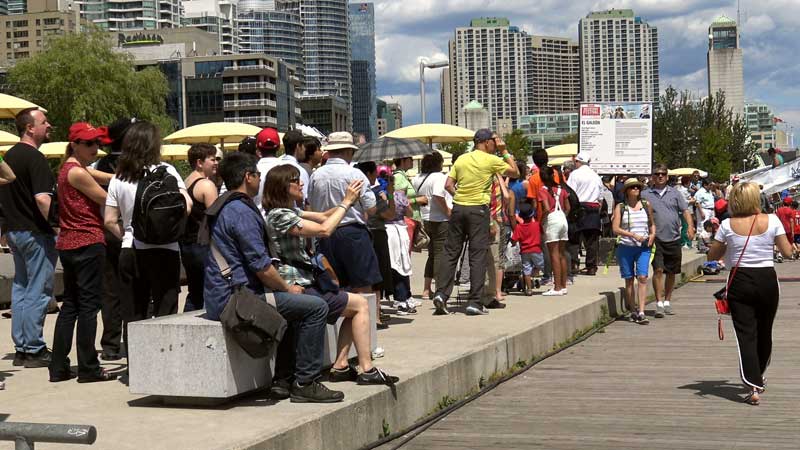 - Bluenose II, the replica of the tall ship on our dime, docked in Toronto for the first time in over 10 years. See and tour the legendary vessel.
- Two other tall ships: Picton Castle and Denis Sullivan
- 2-day Oyster Shucking Competition, hosted by Rodney's Oyster House with special guest Season 6 MasterChef Canada winner Jennifer Crawford. On Sunday June 30 from 2:30 p.m. - 3:30 p.m., 10-12 shuckers will compete. The top shuckers will then compete in a team relay on Canada Day that will see the pros and participants from Bluenose II and Picton Castle go head to head. Jennifer Crawford and Rodney's Eamon Clark will be available for interviews after the shows.
- Maritime Market with 15+ vendors. Indulge in lobster and crab poutine, lobster rolls, scallop and bacon pizza and oysters and discover nautical jewelry and accessories, beauty products inspired by the sea and more.
- Live entertainment at the East Coast Kitchen Party Stage from The Next Generation Leahy, Great Canadian Fiddle Show, Screeched Inn and Shreem x Celtic Remixing.

IT'LL BE A GREAT, LOFTY, TOWERING, SKY-HIGH KIND OF WEEKEND. WE CALL IT TALL FOR SHORT.

Free admission to all parks. A deck tour ticket is required to board the tall ships. Tickets can be purchased online and onsite.

As a result of rising water levels, the festival announced at the end of May that programming parks and ship locations will be moved to the east end of the waterfront. The media alert with more information can be found here.