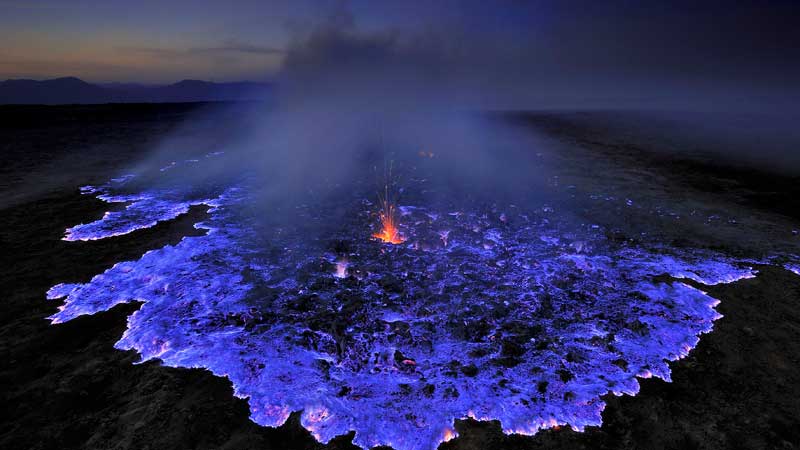 Sixty-odd photographs chronicle more than thirty years spent exploring the wildest and most spectacular spaces in the world to bear witness to the earth's incredible 4.5 billion-year journey. The ORIGINS exhibition unfolds like a chronological tapestry leading the visitor from the primeval chaos to the reign of the living. A moment of pure contemplation, an ode to the raw beauty of our planet which, at the same time, calls us to protect all its biodiversity.

Olivier Grunewald, photographer
Olivier Grunewald is fascinated by the manifestations of the natural world. His various stories have earned him the top prize from the Fondation de la Vocation, four prestigious World Press Photo awards, and multiple International Wildlife Photographer of the Year awards initiated by the Natural History Museum of London. He has also directed several documentaries including Nyiragongo, Journey to the Center of the Earth and Kawah Ijen, the Mystery of the Blue Flames. His latest film, Dallol, On the Frontiers of Life, started airing in autumn 2016.

Bernadette Gilbertas, journalist and writer
Bernadette Gilbertas travels the world with Olivier Grunewald. She developed her passion for discovery during her years in university where she studied, then taught, geography. For 11 years, she managed the Rhône-Alpes Federation for the Protection of Nature. Today, Bernadette is a freelance journalist and writer. Her writings (articles, books, documentaries, exhibitions...) advocate the protection of natural environments and celebrate the men and women—scientists or die-hard activists—who dedicate their lives to this cause. The couple's daughter has been part of the adventure since birth. A life choice and a family adventure that goes way beyond a mere career path.

Espace pour la vie is made up of four attractions on the same site: the Biodôme, Insectarium, Jardin botanique and Planétarium Rio Tinto Alcan. These four prestigious municipal institutions form Canada's largest natural science museum complex. Together, they are launching a daring, creative urban movement, encouraging all of us to rethink the connection between humankind and nature and cultivate a new way of living.