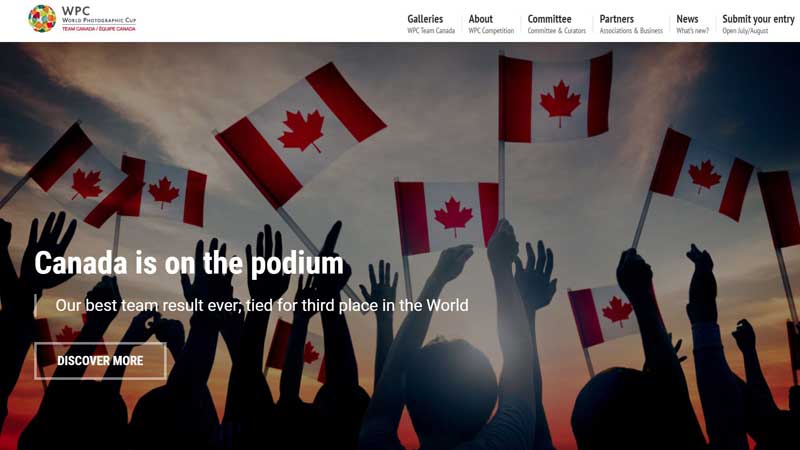 Team Canada gathered virtually to watch, cheer and celebrate as they accomplished something never before achieved, a 3rd place trophy for Canada against the absolute best images from 38 nations around the world.

Points were awarded to each country based on each top 10 placement and the medals won by their photographers. The success of these four photographers secured Canada 3rd place (tied with team Spain) in the team competition:

Jacquie Matechuk was the first to bring home a medal, earning bronze with her capture of an empty downtown Calgary high-rise shot in a somber cloak of darkness during Covid. "Representing Canada was a dream come true, but what I didn't expect was the camaraderie waiting on the other side. I have never experienced a photographic competition anything like WPC Team Canada," shared a jubilant Matechuk.

Next in line, the entry from Louis-Philippe Provost claimed Canada's second medal and only silver, with a powerful architectural image featuring the beauty of the Ray and Maria Stata Center. Provost later revealed, "This is unbelievable, my goal was to make the team and now I have a silver medal. I am at a loss for words. Being part this team and representing my country was truly something that I will cherish for many years to come."

Placing 9th in the world was, Stephanie Lachance with her dreamy composition of a father embracing his young son."It's great to place 9th in world as there were so many amazing images and the experience of being on Team Canada was really exciting", commented Lachance.

Finally Ammara Sadiq secured 6th best with her ethereal portrait of a young ballerina. "To place 6th was a shock. What a tremendous honour being a member of Team Canada and contributing towards Canada's third place trophy! Go Team Canada!" celebrated Sadiq.

WPC Team Canada Co-Captain, Jillian Chateauneuf, was elated : "This is our best finish ever and quite an achievement for Team Canada. We are an extraordinary group of photographers, committee members, and curators with everyone contributing to Canada's success."

To learn more about the stories behind these internationally acclaimed images, and view the entire 2021 Team Canada submission, please visit: http://www.wpcteamcanada....

The World Photographic Cup (WPC) is a global photography competition, launched as a vehicle to universally share photographic style, encourage image excellence and create friendships across all diverse cultural environments. The WPC is a not-for-profit organization. Its singular goal is to unite photographers in a spirit of friendship and cooperation.

All photos are copyright of the photographer and World Photographic Cup Team Canada. The photographers grant one-time permission to use the images in connection with this story, provided they are credited and a link to the Team Canada website is included.