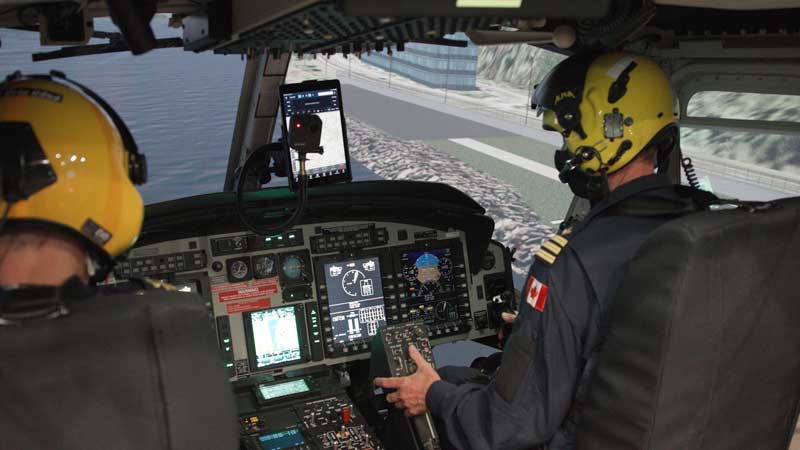 The Canadian Coast Guard helps keep Canada's waters safe, clean, and more accessible to keep our economy moving. In support of these missions, the Coast Guard operates a fleet of 22 helicopters. These helicopters and pilots provide support to ships engaged in critical maritime work including aids to navigation, environmental response, icebreaking operations, and in support of search and rescue as needed.

The new full-flight simulator allows the Coast Guard to offer helicopter pilots training opportunities that would otherwise be difficult or impossible to achieve while training in an aircraft. The simulator is designed to offer experienced pilots alike an immersive simulated flight experience, and can replicate a variety of flight and weather conditions faced when flying a Coast Guard helicopter in various parts of the country. The simulator will allow Coast Guard helicopter pilots to train for the sometimes difficult flight conditions experienced such as inclement weather, missions on top of a mountain, sling load operations, Arctic operations, as well as search and rescue.

The simulator will be based at the Transport Canada Training Centre at the Ottawa International Airport, where helicopter pilots will be able to complete training in an innovative and cutting-edge environment.

"Through the Canadian Coast Guard's Fleet Renewal Plan, we're ensuring our members have the best available equipment both in training and on the job. The new full-flight simulator is cutting-edge technology that will be used to safely train our Coast Guard helicopter pilots, providing a realistic and immersive training environment. Congratulations to everyone at CAE who have contributed to the design and construction of this remarkable simulator."
- The Honourable Bernadette Jordan, Minister of Fisheries, Oceans and the Canadian Coast Guard

- Coast Guard helicopters deliver services with a fleet of 22 aircraft – 15 light lift and 7 medium lift helicopters – strategically located at 9 bases across Canada.
- Coast Guard helicopter pilots take part in a wide variety of operations such as monitoring oil spills and ice conditions. Helicopters are also used to maintain and construct navigational aids and telecommunications equipment, transferring personnel and cargo between ship and shore, as well as to provide support to scientific missions.
- In February 2016, Public Services and Procurement Canada (PSPC), on behalf of the Canadian Coast Guard, awarded a contract of $17M to CAE Inc. for the design and construction of the helicopter full-flight simulator as part of the Canadian Coast Guard's Fleet Renewal Plan.
- The Coast Guard helicopter simulator will be the first ever helicopter simulator of its kind in Canada and in the world featuring a 12-feet dome visual system combined with the most detailed geo-specific databases ever built for a helicopter.

The Canadian Coast Guard operates a fleet of 22 helicopters to support critical marine services such as aids to navigation, marine communications and traffic services, icebreaking operations, environmental response and search and rescue when needed. The acquisition of the new full-flight helicopter simulator supports training of Coast Guard helicopter pilots to fly its fleet of light-lift and medium-lift helicopters using the most advanced technology of its kind.

A Canadian-made and cutting-edge training tool

Designed and built by CAE Inc., in Montreal, Quebec, the full-flight helicopter simulator is a CAE 3000 series helicopter simulator and a Level D qualified training device, which means that it is capable of simulating both Coast Guard aircraft types so realistically that pilots will be able to perform the majority of their helicopter training without needing to train in an actual aircraft.

Features and technical specifications of the full-flight simulator include:

- a 12-foot dome and a projection visual system with a 220 degree horizontal field of view and a 85 degree vertical field of view combined with the most detailed geo-specific databases ever built for a helicopter.
- advanced motion and sound systems combined with a vibration platform and a specific aircraft aerodynamic model that all contribute to realistic and highly immersive training.
- a roll-on/roll-off cockpit conversion design that allows training on both Coast Guard helicopter types, the light-lift and the medium-lift helicopters; and
- a customized range of missions specific to Coast Guard operations.

As a certified Level D training tool, the full-flight simulator recreates the Bell 429 and Bell 412 EPI cockpits including the same flight controls, avionics, and flight instrumentation of the actual helicopters.

Some of the benefits of the new helicopter simulator include:

- ability to train various mission profiles in various operational training areas;
- providing pilots with a safe training environment;
- allowing pilots to familiarize themselves with equipment prior to use; and
- reducing risks to pilots and aircraft.

Equipped with an extensive range of weather and emergency scenarios, the simulator allows pilots to train for challenging and high-risk situations that would otherwise be too dangerous to train in a real aircraft, without ever leaving the ground. Using computational fluid dynamics, the aerodynamic models in the full-flight simulator are capable of simulating realistic wind and turbulence at key Coast Guard landing sites as well as during shipboard operations. This simulator is also capable of simulating load operations using a limited field of vision "below" the device, allowing the pilot to look down and view a sling load on a separate screen.

All of these capabilities improve the training of Coast Guard helicopter pilots and ensure they are better prepared for any situation they might face during operations.

With the roll-on/roll-off cockpit conversion feature, the full-flight simulator can accommodate training for both Bell 429 and Bell 412 EPI cockpits. The cockpit unit can be removed and replaced to provide training versatility and includes the simulated cockpit area complete with forward shell, structures, flight controls, and all panels and instruments. When the cockpits are swapped, the second cockpit can be docked in another flight training device to allow limited training to continue. This feature provides for flexibility in training while saving time and costs.