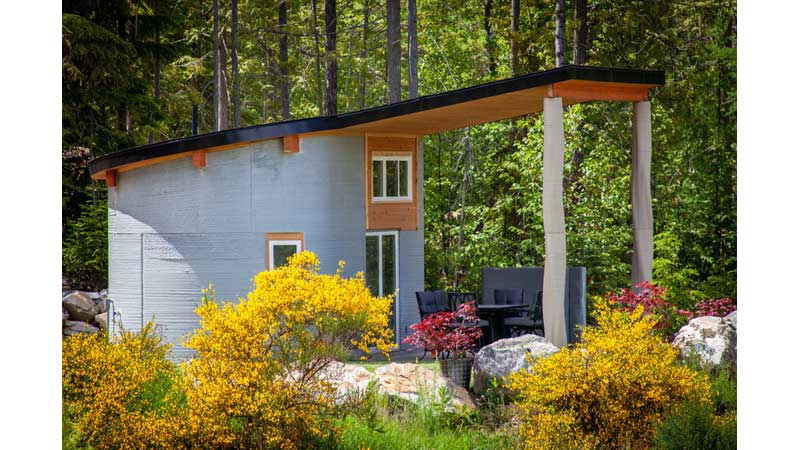 Ambitious, yet humble, the house showcases the advantages that the 3D Concrete Printing Technology has to offer; free form design with curved walls that gives the house the fluid outline combined with the robust structure that enables the home to be completely sound and climate proof, easy to maintain and clean.

The Fibonacci House was printed using a concrete printer designed and sold by Twente Additive Manufacturing, a construction-technology company. The Dutch start-up was founded in 2018 by its core technical team coming from the automation and wind energy industry. With subsidiaries in Canada, Germany and soon Dubai, Twente quickly took a leading role in the global 3D Concrete Printing (3DCP) development; today it is recognized as one of the five most influential companies of the entire 3DCP industry.

The design of the house was created using the Fibonacci Sequence, a well-known pattern that is often referred to as "the golden ratio" which can be found in nature in numerous variations. The site of the printed house is in the Kootenay Lake Village project at Procter Point, one of the fastest-growing communities in the Nelson, BC catchment basin.

All proceeds from the Airbnb revenues are being directly diverted to an affordable homes project spearheaded by World Housing, an international NGO. Building on the lessons learned from the Fibonacci house, World Housing will build what they hope is the first community in Canada of affordable living space built entirely with 3D printing. World Housing has already provided living space for thousands around the world in developing nations and felt it was time to support marginalized populations in their home country. The first project tentatively named Sakura Place will be a cluster of five 3-bedroom homes that combine to form the petals of a Japanese cherry blossom. These homes will be used exclusively to help single mothers re-establish healthy and safe living spaces that combine access to nature for their children which is often excluded from affordable housing in major urban centers.

At 35 m2, the Tiny Home has a spacious living area with a furnished kitchen section, and it can sleep up to two adults and two children on its two mezzanine areas. The bathroom is tiled with mosaic right to the very middle of the Fibonacci curve with the shower head at its center. Its yard is a continuation of the curve which overlooks the community Central Park and vistas of the majestic Kootenay Lake. All the non-cement elements of the home were made from the sustainably harvested cedar and fir from KLV's next-door neighbours the Harrop Procter Community Forest. The modern, elegant style of the Tiny Home respectfully complements the natural beauty of one of the most desired places in the province.