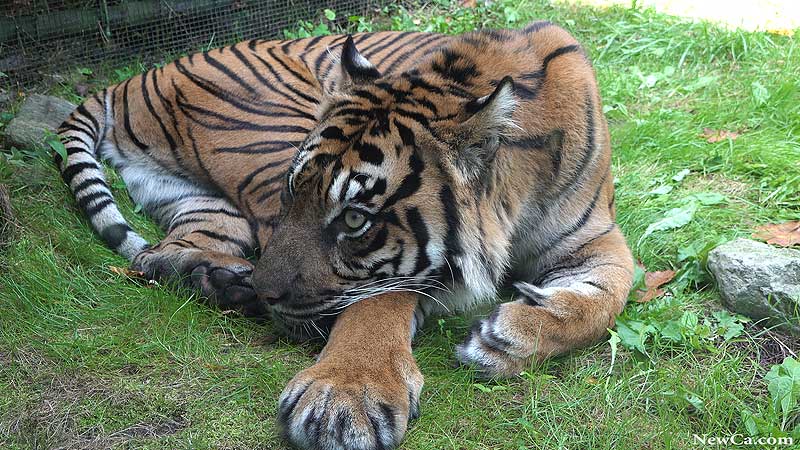 🦁🌳🚶‍♂️ 2021 Toronto Zoo. The Most Memorable Moments of the Summer

Zoo animals, like humans, love to play and dance. They are also great actors. They love to entertain visitors, especially children, who are the most welcoming and grateful audience.

Kissing rhinos and hippos, giraffe playing with a peacock, mother tigress Mazi playing with her tiger Mila inside and outside the pavilion, flirting zebras, male peacock dancing to attract females, butting rams, playful grizzlies and dancing otters, lunch and snake showers , the journey of the starfish and the appearance of the hiding octopus, where wolves live and where polar bears and red foxes hide, look up to find red pandas, and many more rare and funny moments from the life of the zoo animals.

Toronto Zoo, the Canadian animal paradise, celebrated its 47-th Birthday on August 2021. Even at the tough time of COVID-19, it remains the world's leading zoo, a member of the international organizations Association of Zoos & Aquariums (AZA) and Canada's Accredited Zoos and Aquariums (CAZA).

Over the 47 years of its existence, the Toronto Zoo has not only significantly expanded the contingent of its inhabitants, but also acquired the most modern scientific and technical base. Using the most advanced medical technologies zoologists are able to achieve unprecedented success in the preservation and breeding of rare and endangered animal species.

The COVID-19 pandemic, with its lockdowns and restrictions, disrupted the usual life of the zoo and its inhabitants for many months. But temporary difficulties did not become an insurmountable obstacle.

Dolf DeJong, the young, energetic and creative Toronto Zoo CEO, was able to inspire and lead employees, while reminding Toronto people that the zoo entrusted to him continues to live a normal life. He found opportunities to attract more visitors despite all lockdowns and prohibitions by organizing a whole series of new and non-traditional events for the zoo, such as Scenic Safari Drive Thru, Terra Lumina Night Walk, Christmas Market with a Christmas tree, Holiday Drive-Thru and others.

And now COVID-19 is behind. The restrictions are gradually being lifted, and inspired by the hope of returning life to normal, we are all happy to relax in a parks. The zoo is the undisputed favorite of the adults and children recreation.

The Toronto Zoo is happy to open its doors again. The pavilions and paths of the park again filled with children's joyful laughter, numerous cafes opened their doors to visitors. And no less than people, the zoo's inhabitants are animals themselves, glad to the crowds of spectators. Who said that animals don't like cameras and video shooting? Quite the opposite, they are happy to pose for everyone, and especially for children.

The favorite children's attraction, the carousel, attracts visitors with cheerful music. And to ride it, you have to stand, albeit a small, but a queue.

Not so long ago, a new open-air cage with goats appeared in the zoo, which attracts many kids. These animals have not yet been seen by many young Toronto residents. Although goats are not at all rare animals, there are a lot of them on Canadian farms in the area, but not all city children have an idea about them. That is why meeting with them is an interesting and pleasant experience.

Children like to communicate with these representatives of "herbivores" very much. They seem to feel a kinship with them, because they are just as small, kind and domestic. Goats respond to grateful little visitors and happily approach almost the fence itself, stretch out their muzzles and in every possible way show their gratitude for the attention.

The goat cage is located next to the playground, a favorite place for all young visitors. A two-story hut with a built-in pipe, along which you rapidly slide down, and with a stone miracle mountain in the middle, rises in the center of the site. Kids also can find here labyrinth paths, stone turtles and exhibits of huge spiders, aviaries with birds, and cages with guinea pigs, and sheep, and more.

Playground is in a enclosed park with many trees and flowers. Children are happy to go to the zoo in order to spend some time on the site, which is unlike any of those installed in the city.

It should be noted that the Toronto city authorities took care of the kids a lot. Over the past few years, many new playgrounds have appeared, and the old ones have been refurbished. And now all of them are equipped with the best equipment for children's recreation, taking into account the safety of children, the ability to use it by those who cannot independently move. Some sites even have a teaching alphabet for Braille so that all children can communicate on an equal footing. No doubt parents are very grateful to the officials for this. And although the COVID-19 temporarily deprived children of the opportunity to spend more time in such places, as they get out of a difficult situation, they have more and more opportunities to join a fun recreation.

After visiting the playground, visitors scatter in different directions in search of animals. And here the Toronto Zoo presents opportunities for browsing, which will be enough for more than one day. After all, it contains more than 5,000 animals, and professional gardeners make sure that the park attracts attention with its unique flora, creating unforgettable landscapes every year.

The zoo is huge in territory, 125 hectares (310 acres) of tableland and 162 hectares (400 acres) of forest in the Rouge River Valley, and full of greenery and flowers. Kids and their parents come here not only to meet their beloved animals, but also just to relax in the shade of trees, which is especially important in the summer heat. Fortunately, there are many equipped picnic areas at the zoo. Next to them you can find a cafes with light meals and large selection of drinks.

A frequent phenomenon is peacocks proudly strolling along the paths of the zoo, followed by children running with joy and shouts. Often peacocks wander into the picnic zone, show themselves and look at the chewing audience.
Scaring away flocks of seagulls and geese is also great fun for children, especially when parents turn their backs.

The pavilions of the zoo are far away from the coolest places, but even in the summer heat there attracted a lot of visitors this summer.

Despite COVID-19 and three lockdowns that the Toronto residents had to go through, the zoo workers managed to get out of this difficult situation with dignity. Thanks to their efforts, attention and care, none of the animals became infected. People defended not only themselves, but also animals, treating them as their own.

Throughout the summer of 2021, from early morning until late at night, the Toronto Zoo was open to visitors. And everyone who missed meetings with tigers, giraffes, lions and other representatives of the animal world was happy to use this opportunity.

NewCa.com bring to your attention the best and most beautiful video moments in the life of the inhabitants of this wonderful park, which has been pleasing more than one generation of Canadians for 47 years. Not only children but also adults love to come here. No doubt, the Toronto Zoo is the best place for family vacation

Enjoy a meeting with Toronto Zoo and its inhabitants in a cozy home environment. Watch the new NewCa.com video in 4K quality with the highest contrast ratio (HDR) and vivid colors, surround sound and beautiful sound of nature, as well as beautiful relaxing music.