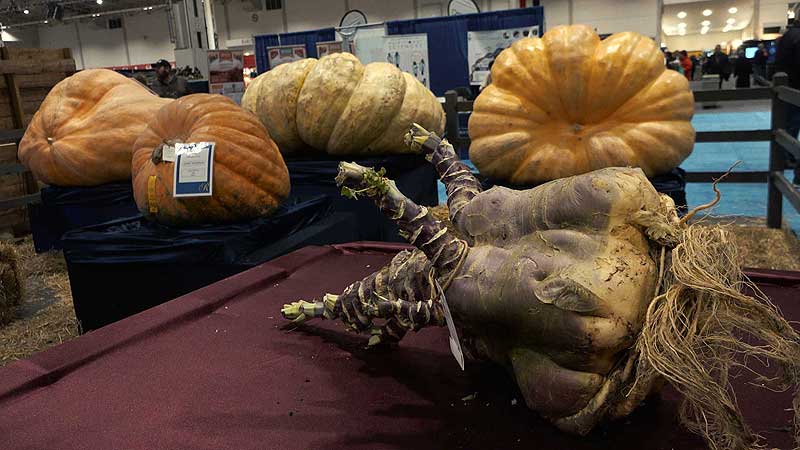 After a two-year in-person hiatus, The Royal announced today it will be back and bigger than ever to celebrate its 100th anniversary. Hosted at Toronto's Exhibition Place from November 4-13, The Royal will showcase the very best in Canadian agriculture, local food and equine excellence - just as it has done since the first Fair opened its doors in 1922.

"Since 1922, The Royal has celebrated the very best of what Canada has to offer through world-class competitions, interactive education and inspiring entertainment," said Charlie Johnstone, Chief Executive Officer, The Royal Agricultural Winter Fair. "This year's Royal promises to be truly special as we celebrate "A Century of Champions", creating exceptional and unforgettable experiences for all those who compete, exhibit and attend The Royal. We're excited to announce some of our 100th-anniversary initiatives today and can't wait to see them come to life at 2022's Fair."

New this year, The Royal will kick off its centennial celebration ahead of opening day with a 100th Anniversary Gala Dinner and Royal Showcase on November 2. The historic Heritage Court at Exhibition Place will be transformed to welcome 1,000 high-profile guests for a meal curated and prepared by acclaimed chef, Michael Bonacini. Following dinner, the evening will continue inside the Coca-Cola Coliseum where an additional 4,000 guests will be treated to The Royal Showcase - a true celebration of Canadian excellence hosted by comedian and television personality, Rick Mercer. The show will include presentations from St. Andrew's College Pipes & Drums, The RCMP Musical Ride, Ontario's first poet laureate, aspiring country musicians, First Nations singer-songwriters and a special performance from the legendary Canadian band, Blue Rodeo. Tickets will be available for purchase at royalfair.org in the coming months.

While the Gala Dinner and Royal Showcase will be an unforgettable evening, it is just one of the many anniversary celebrations taking place this year. Here is a summary of other initiatives scheduled for the 2022 Fair:

• RCMP Musical Ride. The fan favourite RCMP Musical Ride will return throughout the entirety of 2022's Fair. This iconic symbol of Canada features 32 horses and riders performing intricate figures and drills choreographed to music - movements that demand the utmost skill and control.
• Royal Horse Show. For the first time in The Royal's 100 year history, the Royal Horse Show will be an FEI (Fédération Équestre Internationale) 5*-W event, in addition to being officially recognized by Equestrian Canada as Canada's National Championship in the Hunter, Jumper and Equitation disciplines; featuring The Canadian Show Jumping Championship.
Agricultural Competitions. This will be a historic and unprecedented year in the livestock barns as nearly every breed - large and small - will be hosting their national competition at The 2022 Royal.
• Food Competitions. For the first time ever, the cheese, butter, ready-to-eat meats and ice cream competitions will be moved to June 2022 to ensure in-season judging. The jams and jellies, hot sauce, pickling, maple products and the ever-popular butter tart competitions will continue to take place in September. You can expect to see the Royal Champions in all these competitions integrated into various restaurants and hospitality initiatives at this year's Royal.
• Royal Tartan. The Royal commissioned a Canadian tartan designer to create a 100th-anniversary tartan, accredited by the Scottish Register of Tartans. The design brings to life "A Century of Champions" with 100 threads of royal blue and 22 threads of dark blue (representing the Fair's centennial span - 1922-2022). The Royal Tartan will be available for purchase in various merchandise items including a luxury wool scarf made with The Campaign for Wool, whose patron is His Royal Highness The Prince of Wales.
• 100th Anniversary Display.To pay tribute to The Fair's long and prestigious history, The Royal has introduced a new role - a Royal Archive Curator - tasked with curating, designing and building a physical exhibit and virtual platform with highlights from the last 100 years.
• 100th Anniversary Timeline. Launching online today, The Royal 100th Anniversary Timeline offers exhibitors and fans the opportunity to upload their treasured Royal Moments - memories, family photos, and stories etc., - to a virtual timeline that will be leveraged across The Royals content platforms.

And that's not all: additional activations and programming will be announced at a later date, including the unveiling of the 2022 Royal Ambassador - taking over from the 2021 Ambassador, Roy The Royal Rooster.