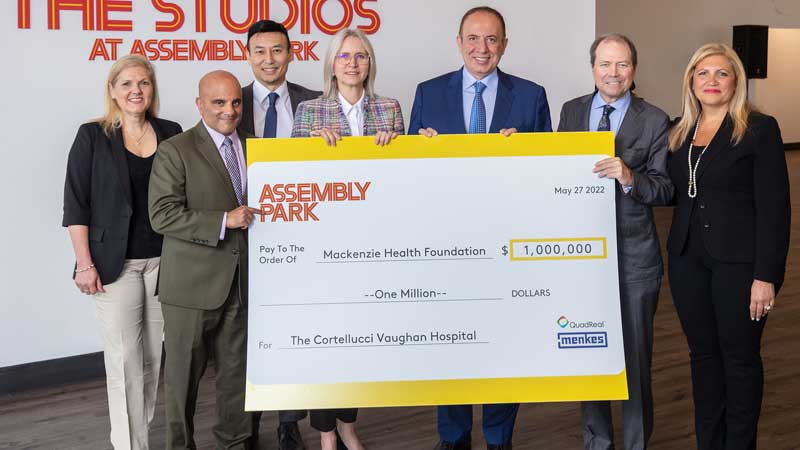 QuadReal Property Group (QuadReal) and partner Menkes Developments Ltd. (Menkes) are pleased to announce the official launch of Assembly Park, a master planned, multi-faceted, mixed-used development located at Highway 400 between Highways 407 and 7 in the Vaughan Metropolitan Centre (VMC). Poised to be the new downtown for the City and the "soul of the VMC", the Assembly Park community, developed by QuadReal and Menkes, will feature diverse and modern housing options, compelling retail experiences, new schools, an extensive network of lush parkland and socially-oriented public spaces. The QuadReal and Menkes team have launched and sold the first of several slated residential projects in Assembly Park: Mobilio, Festival, Grand Festival, and next up, Bravo (the third phase of Festival), which will house over 6,500 residents combined. Together, QuadReal, Menkes and City of Vaughan Mayor Maurizio Bevilacqua celebrated the official launch of the community at a ribbon cutting ceremony on Friday, May 27, 2022. As a part of this ceremony, QuadReal and Menkes solidified their commitment to the broader community with a $1 million donation to the Mackenzie Health Foundation.

"The creation of Assembly Park has been a careful and thoughtful process and we are thrilled to be officially launching this dynamic new community," states Toby Wu, Executive Vice President, Development, Canada, QuadReal Property Group. "Inspired by Vaughan's diversity, Assembly Park will bring together people and families of all backgrounds and serve as a focal point for arts and culture within the Vaughan Metropolitan Centre (VMC)."

"We came together with QuadReal as they are a like minded company with a commitment to transform the City of Vaughan. They valued our extensive experience building innovative developments and shared our vision to create a world-class urban centre," said Alan Menkes, President High Rise, Menkes Developments. "The creation of Assembly Park will transform the Vaughan we know today, making it not just a suburb of the GTA, but rather a destination in and of itself."

"City building is a labour of love. It is the manifestation of principles and beliefs that embrace the purpose of adding value to the Vaughan human experience. Assembly Park provides an environment and energy where people can live purposeful and meaningful lives. Assembly Park by QuadReal and Menkes delivers on the promise of building an inclusive, avant garde and exciting community." Mayor Maurizio Bevilacqua, P.C. City of Vaughan.

The Future of Assembly Park:

• Designed by Giannone Petricone Associates and IBI Group, Assembly Park will become a pedestrian-first hub of cultural activity, rich in diverse entertainment, shopping and dining options.
• Located in the South Vaughan Metropolitan Centre, Assembly Park is effortlessly connected to the most compelling destinations in the GTA via Vaughan's newest TTC subway stop and the Viva and ZUM Rapid Transit systems.
• Bridging the gap until Assembly Park is complete (approximately 2034), temporary community spaces The Studios, The Plaza and The Gardens have begun to take shape providing Vaughan citizens with an outlet to connect and come together.
-- The Studios at Assembly Park is a temporary multi-use art and content studio, gallery,event and residency space, classroom, destination and celebration of creativity in all its many forms, disciplines and mediums. With 10,000 square feet of programmable indoor community space, this hub of creativity serves as an inspiration point and a tool in continuing the many diverse creative pursuits of the Assembly Park community. In late 2021, a 7,000 square foot mural titled FUTURA by Toronto artist Andre Kan was unveiled and will serve as a significant landmark at The Studios.
-- The Gardens are the serene, romantic and green 1.47 acres of backyard at Assembly Park, a temporary natural gathering space replete with multi-purpose space for communal dining, culinary festivals, private moments, group yoga, herb, flower and vegetable gardens, gardening classes, picnics and aimless afternoons.
• The Plaza is Assembly Park's central public space: a blank canvas for a multitude of diverse uses including beer gardens, farmer's markets, culinary festivals, food trucks, exhibitions and art installations, cultural events, pop-up retail experiences, film screenings, games like chess and table tennis, and community gatherings. Designed to make creative and thought-provoking use of recycled shipping containers, The Plaza is where Assembly Park comes together.

• QuadReal and Menkes presented their meaningful $1 million donation to the Mackenzie Health Foundation at the official Assembly Park ribbon cutting ceremony.
• This gift will further enhance and equip the QuadReal Property Group and Menkes Developments Ltd. (Assembly Park) Domestic Abuse and Sexual Assault Unit and joins the Foundation's historic journey to build Vaughan's own hospital, Cortellucci Vaughan Hospital, which is the first net new hospital in Ontario in 30 years.
• Mackenzie Health Foundation is spearheading the Ultimate campaign – the largest fundraising drive ever led by a community hospital in Canada – which is committed to raising $250 million in community contributions toward the total $1.7-billion project cost of the new Mackenzie Vaughan Hospital. To date, the campaign has raised $211 million for capital projects, medical equipment, technology and educational opportunities for Mackenzie Health.

Assembly Park is honoured to be a part of this historic initiative.