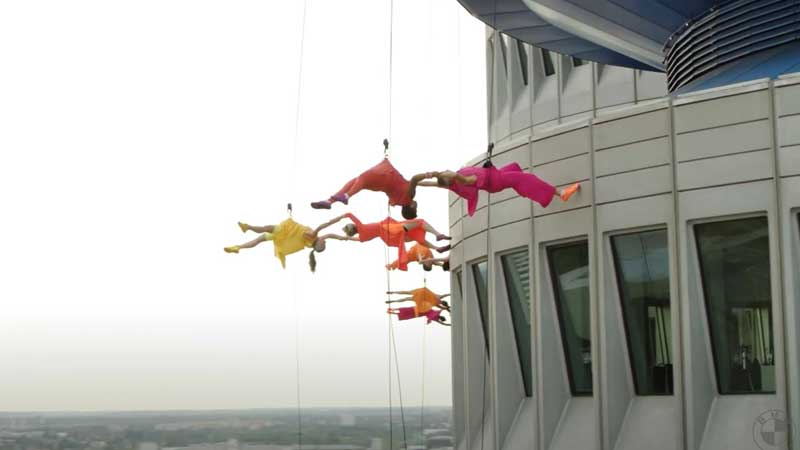 The BMW Group celebrated its corporate headquarters as an internationally renowned architectural icon today with over 200 international guests in attendance. The keynote speech by Pritzker Prize winner Francis Kéré and the appearance by Nihal Saad, Chief of Cabinet of the United Nations Alliance of Civilizations, made the ceremony a special event. In addition to the performance by star tenor Jonas Kaufmann the festivities concluded with a special highlight: With twelve vertical dancers, the US dance project BANDALOOP transformed the BMW Headquarters into a stage in its German premiere. The ensemble created a weightless synthesis for an interplay of architecture and dance. Along with music by Ben Juodvalkis, the façade dancers presented "Momentum Curve", an exclusive performance as a tribute to the unique architecture.

The BMW Group Headquarters, with its suspended construction, is one of the most innovative engineering buildings of the post-war period. In the process, upper floors were first manufactured on the ground, then moved upwards hydraulically on the massive "tower shaft" made of reinforced concrete and completed in several segments. In August 1972, the BMW Group Headquarters was completed. Designed by Austrian architect Professor Karl Schwanzer, the administrative building has since become an icon with global appeal for Munich and the company. The innovative power of Schwanzer's design stands for the BMW Group then as now, making the company headquarters a beacon of sustainable mobility for tomorrow. It is not only a symbol of economic success but also stands for international exchange, peace and interculturalism. Today, the "built communication" implemented by Schwanzer points the way to a new era of electrification, digitalization, and circularity.