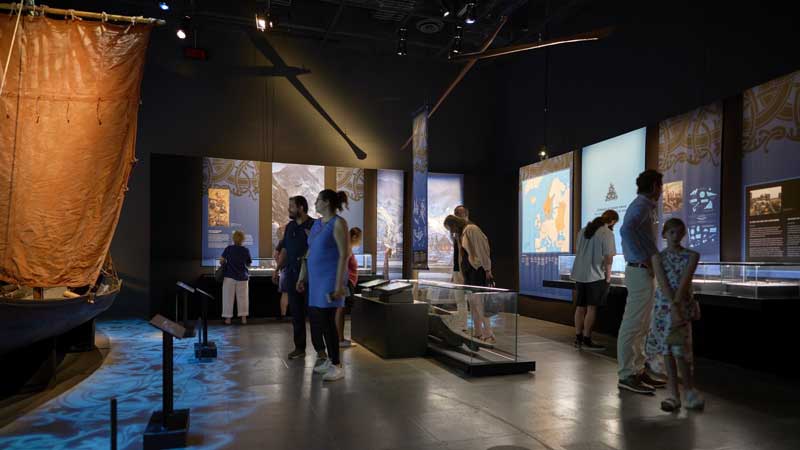 - Continuing until October 10, the exhibition has already welcomed over 325,000 visitors -


At Pointe-à-Callière, Montréal's Archaeology and History Complex, the VIKINGS – Dragons of the Northern Seas exhibition has been seen by over 325,000 people since this past April 14, beating the record set by Queens of Egypt (316,000 visitors) in 2018. Unparalleled performance for this summertime exhibition that offers a unique look at the fascinating world of the Vikings! There's very little time left to join family or friends in exploring this exhibition, which comes to an end on October 10.

Exclusively, and for the first time in Québec, Pointe-à-Callière is presenting 650 authentic objects from the remarkable collection of the National Museum of Denmark—one of the world's finest. Jewelry and finery of exceptional quality, weapons, everyday items… material traces left behind by the Vikings that provide several clues about this legendary people, the mere mention of whose name still fires the imagination in a powerful way. The exhibition's success, just like the Vikings' pervasiveness in pop culture, clearly reflects this.

Based on the latest scientific knowledge on the subject matter, the exhibition paints a most complete portrait of this ancient Scandinavian society made up of peasants and artisans, formidable warriors, skillful merchants, and peerless navigators. Through a renewed collaboration with Ubisoft Montréal, initiated in 2018 for Queens of Egypt, the exhibition takes visitors into the real and imagined world of the Vikings using an immersive design that tells their story through four great tales: the tale of origins, the tale of life, the tale of travel, and the tale of end of days. With VIKINGS – Dragons of the Northern Seas, Pointe-à-Callière has produced a major exhibition on the Vikings, both exhaustive and spectacular.

The VIKINGS – Dragons of the Northern Seas exhibition was produced by Pointe-à-Callière, Montréal's Archaeology and History Complex, through a partnership with the National Museum of Denmark and MuseumsPartner in Austria. It is presented by Desjardins, in collaboration with Ubisoft Montréal and through a partnership with Tourisme Montréal, Hotel Uville, and La Presse. The Museum sincerely thanks its lenders, sponsors, and partners.

Our 30th year… a year of recovery

While Montréal celebrated its 380th anniversary in 2022, Pointe-à-Callière—located on the city's very birthplace—celebrated its own 30 years of history in a big way. It has been a year in which the Museum progressively, and joyfully, saw attendance return to what it had been before the pandemic. In the summer of 2022, Montrealers were able to reconnect with their Museum and take part in several of its cultural activities. After two years "on pause," over 10,000 families participated in free workshops on Sundays, furthering their immersion into the fascinating world of the Vikings. The return to normal was especially noticeable during the summer season with a massive influx of tourists. Visiting from Europe, Asia, the United States, and other Canadian provinces, thousands came to explore the history of Montréal at Pointe-à-Callière and fall under the spell of the popular VIKINGS – Dragons of the Northern Seas exhibition!

For Pointe-à-Callière's 30th anniversary, a special rate for individual memberships—available at the single price of $30—provides unlimited access to the Museum, as well as several other benefits over a one-year period. That's just $5 more than the price of an admission ticket! It's the perfect opportunity to see VIKINGS – Dragons of the Northern Seas and then return to explore the archaeological remains or see other temporary exhibitions, like Favourites! Our Collections on Display, until January 8, and Headdresses from Around the World, the Antoine de Galbert Collection, opening on November 17.