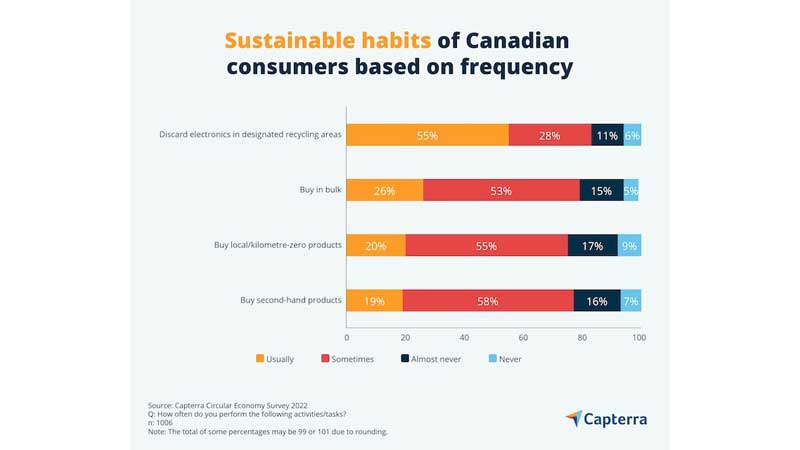 Capterra Canada launched its latest research study of over 1,000 Canadian consumers to understand their participation in sustainable consumerism and the circular economy.

According to the survey, 87% of Canadian consumers acknowledge that their behaviour has a direct impact on the environment. This understanding is reflected in their buying habits, as the same number (87% ) reportedly favour buying products from companies with active circular economy measures in place. The first half of Capterra's report substantiates this, revealing that despite a lack of confidence in their knowledge of the circular economy (only 13% were confident in their understanding of the circular economy), Canadians are certainly interested in contributing to sustainable shopping.

One of these practices is buy-back programs. While 88% stated in the survey that they 'actively care' about extending the life cycle of their products, only 8% routinely participate in them, revealing a significant disparity between interest and participation.

"With buy-back programs, just as with many other sustainable practices, the onus cannot fall entirely on the consumer. Of course, consumers can't participate in programs that don't exist or they're unaware of," reports Tessa Anaya, analyst for this study. "Businesses wishing to appeal to sustainable-minded consumers should not only invest in trade-in programs, locally-sourced products/supplies, and eco-friendly manufacturing processes, but also aim to be as transparent as possible about these changes in marketing efforts."

When it comes to buying behaviours, numbers are typically lower, possibly due to increased effort or cost of actively shopping sustainably (the first half of our report showed Canadians are split 50/50 on whether they'd be willing to pay more to support a circular economy). Just 20% buy local or 'kilometer-zero' products regularly, and only 13% who always prioritize buying second-hand products.

63% of Canadians reportedly buy second-hand products at least sometimes, and 79% have sold their used items at least once, making the second-hand economy one of the most important driving factors of the circular economy in Canada. A significant 86% of respondents often donate products that they no longer use. Of those who do not partake in the second-hand economy, it is not caused by a lack of interest. In fact, 28% said that they would prefer to donate or give away used items, rather than sell them.

Although apps like TooGoodToGo are making strides in Canada to reduce food waste, a mere 7% of Canadians are actively using them, and just 27% are aware of them. However, 30% of respondents reported that they would like to support businesses that actively reduce food waste.