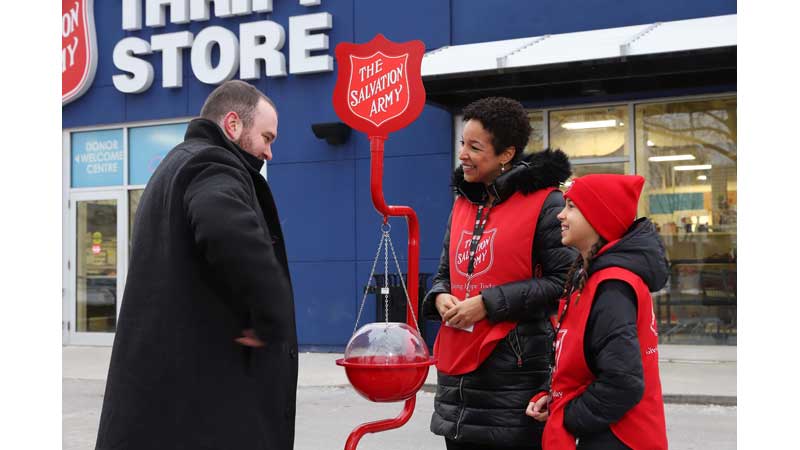 People are struggling. The combination of on-going economic uncertainty, inflation and impact from the pandemic is being felt acutely on the front line of social services. The Salvation Army has seen a 30 percent increase in families with children who need our help and are concerned this need will continue to increase over the winter months.

"It's a tough time for many and those hardest hit include families with children. We're seeing more and more families asking for our assistance for the first time. With the threat of a recession, we anticipate this number will continue to grow," says Lt-Colonel John Murray, territorial secretary for communications for The Salvation Army. "Now more than ever before, we are here for people who need us."

Last year, the organization saw a national increase of 500,000 people who looked to The Salvation Army for assistance.

The overwhelming need underpins the organization's annual Kettle Campaign fundraiser. This year's campaign, entitled, Her Only Meal, focuses on providing support to hungry children and families during the Christmas season and hopes to raise $22 million. Thanks to an anonymous donor, the campaign includes a matching gift up to $100,000. Donors can double their impact and provide twice as much food and hope. Donations to the campaign will support programming that provides food, clothing, gifts for children and other necessities.

Contributions to the Kettle Campaign allow The Salvation Army to provide practical assistance for all who need it, throughout the year. This includes meals, food banks, children's breakfast programs, housing supports, substance-use recovery, and care for women and children fleeing domestic violence. Every donation to any of the 2,000 kettle locations across the country remains in the community in which it was given, to support local needs. Most units across Canada offer a safe and simple tap-and-go payment option to donate.

Each year, The Salvation Army relies on the support of thousands of kettle workers who give their time and energy to collect donations at kettle locations across the country. Furthermore, the campaign would not be possible without the support of numerous corporate partners, including Walmart Canada, BellMedia, Loblaw Companies Limited, Costco, BC Liquor Stores, LCBO (in Ontario), Canadian Tire, Cadillac Fairview, Oxford Properties, Ivanhoé Cambridge, Morguard, Metro, Safeway, Save-on-Foods, Sobeys, Bass Pro Shops, The Salvation Army National Recycling Operations (thrift stores) and many more.