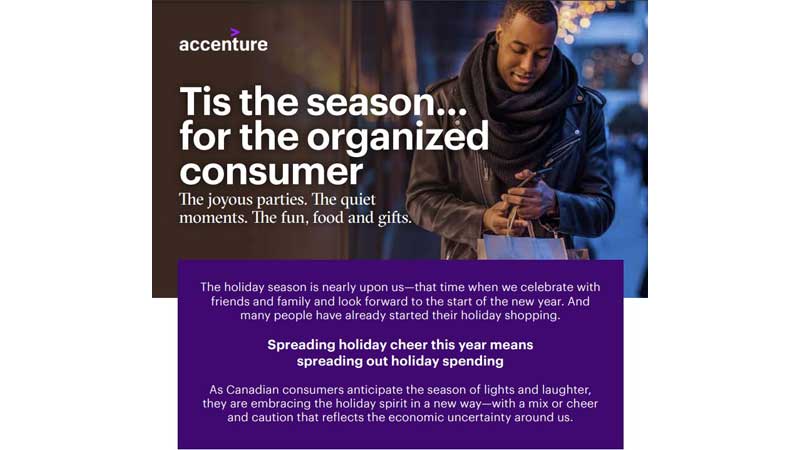 Canadians are looking forward to the holiday season but will be trimming their spending ahead of time to make the most of it, according to the 2022 Holiday Shopping Report from Accenture.

The 11th annual survey found Canadians will be saving money in multiple ways in the run-up to the holidays, including cutting back on non-essentials such as entertainment subscriptions and eating at restaurants (69 per cent), spending less on travel or hotel stays (63 per cent), and even having fewer decorative lights to lower their utility bills (61 per cent).

More than two-thirds of Canadians say they will even be cutting back on gifts to their extended family and friends (67 per cent) or not exchanging them altogether (57 per cent).

Many others say they'll take on a side hustle (41 per cent), such as babysitting, dog walking, selling items on a marketplace, or that they'll increase their work hours (39 per cent) to earn additional income before the holidays.

Overall, Canadians expect to spend $643 this season, an increase from last year's average spend of $635 but still less than the pre-pandemic spending level of $721 in 2019.

"As we near the holiday season, consumers have tightened their wallets and are making adjustments to their everyday spending while finding new ways to boost their income," said Robin Sahota, managing director at Accenture and the leader of its retail practice in Canada. "While consumers look forward to yet another shopping season, success for retailers will come from being empathetic to consumer challenges and focusing on delivering enhanced in-store experiences, meeting rising consumer demand for more efficient shipping and doing right by their employees."

Perhaps unsurprisingly, many Canadians (25 per cent), anticipate spending less this year compared with than last – with 54 per cent saying they can't afford to.

When it comes to deciding where to shop and how to spend money, price is the top consideration (81 per cent), followed by quality (69 per cent) and discounts/offers (53 per cent). Price was especially important for Boomers (86 per cent) and least for Young Millennials (72 per cent).

Shopping sustainably remains a consideration among Canadians. More than a third (38 per cent) of consumers say they are likely to opt for green or environmentally friendly options when shopping in the next six to 12 months.

Price is also what is driving Canadians not to rush their shopping. Forty-two per cent say they want to take the time to look for the best prices, or will shop when and as they are offered promotions or discounts (37 per cent).

The survey highlighted Canadians' ongoing preference for in-store shopping. As in 2021, this year 57 per cent of Canadians say they would do the bulk of their holiday shopping in-store, rather than online. Customer service is a top motivator for those doing in-person shopping. Eighty-two per cent of Canadians cite knowledgeable staff that provide help or advice as a top factor enticing them to one store over another, followed by in-store promotions (80 per cent) and attentive and friendly staff to make you feel special (75 per cent).

"For retailers, good in-store experiences go back to the basics of excellent service, the human touch, and in-store incentives," said Sahota. "We're seeing Canadians be more strategic this holiday season and retailers that offer promotions combined with convenient, hassle-free shopping, will be rewarded by consumers."

Shopping in the metaverse

For the first time, Accenture asked whether respondents might purchase a gift in the metaverse.

Gen Z respondents were most likely to say yes (10 per cent) – though the metaverse trailed behind in-store, online marketplaces or online retailers. A larger percentage, or 13 per cent, of Gen Z say they have a non-fungible token (NFT), a digital asset, on their gift wish list, and 14 per cent say they're likely to buy an NFT for someone else.

Almost half of Canadians (48 per cent) are interested in visiting virtual stores over the holiday season, if offered by a brand they know and trust.

"The metaverse continues to show how shopping can be reimagined," said Suzana Colic, managing director, retail strategy & consulting at Accenture in Canada. "Gen Z and Younger Millennials are keen to explore virtual shopping, two powerful demographics when it comes to technology usage and trendsetting. In today's world, enterprise retailers who balance technology, responsible and sustainable business with customer centricity, will be better positioned for the future of shopping."

With holiday spending often comes holiday bills. That is perhaps why more than half (52 per cent) of consumers say they will spend less money or buy less (50 per cent) for the next six to 12 months.