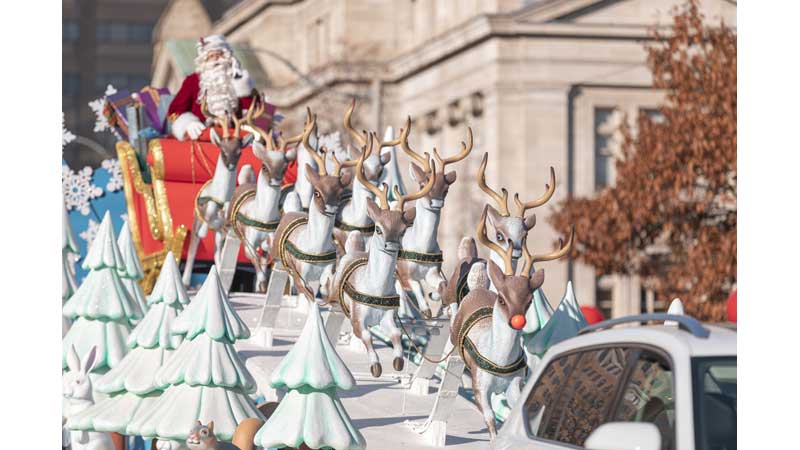 🎅🤶 Upcoming Event: The 118Th Original Santa Claus Parade Will Be Live On The Streets Of Toronto In 2022

- The Original Santa Claus parade returns to the streets of Toronto, Sunday, November 20 at 12:30 pm. -

Celebrate the magic of the Original Santa Claus Parade as Santa Claus will once again be back on the streets of Toronto to spread holiday cheer again this year!

Join the fun on Sunday, November 20th for the return of fan-favourite floats, marching bands, colourful costumes, and of course, Santa and Mrs. Claus! This year the parade features 26 beautifully decorated floats, and for the first time, the Indigenous float called "Creation Story" can be seen in-person! The Holly Jolly Fun Run returns, as do the beloved Celebrity Clowns, to lift our holiday spirits.

"The Santa Claus parade is such a treasured annual event in our city for kids and families looking to celebrate the holidays," says Mayor John Tory. "The parade adds vibrancy and excitement to our city and we are ready to see it back on our streets this year. We look forward to welcoming Santa to Toronto in November and spreading the holiday cheer."

The parade will start at 12:30 pm at Bloor Street West and Christie Street and proceed down University Avenue to Wellington Street West, east on Wellington to Yonge Street, then south on Yonge to Front Street, finishing at Front and Jarvis Street.

"We're thrilled to bring friends and families together again to celebrate the 118th Original Santa Claus Parade," says Clay Charters, president and CEO of the parade. "This parade is a world class event and we want to sincerely thank our volunteers and sponsors who have helped us mark the return of this magical holiday tradition."

The Original Santa Claus Parade made its debut in 1905, thanks to the sponsorship of T. Eaton Co. The original parade was a "one man show" with Santa as the only attraction. Santa travelled in a special automobile through downtown Toronto, handing out souvenirs and surprise packages to the community along the way. Today, the parade is a not-for-profit organization that thanks to the support of corporate partners and donors, is enjoyed by millions of Canadians and people around the world.

The 118th Original Santa Claus Parade airs Saturday, Dec. 3 at 7 p.m. ET/PT exclusively on CTV, CTV.ca, and the CTV app. Additional broadcast details to be announced at a later date.

For more details on this year's parade visit: https://thesantaclausparade.com/